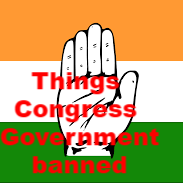 Ever since the BJP has come into power the opposition is in a trance. Not only does Congress raise the question on each of their decisions they even say that in this government people do not have the right to say what they feel. However, what they are saying is drastically different from what they had been practicing in their rule. In reality, in 60 years of their rule, Congress has banned many things which they thought could have been a danger to their rule. Let us read about some of them here. READ ON NEW WEBSITE

Lotus and the robot

The man from Moscow

14 Books Every Romantic Girl Should Read

The Struggles Of A Single Girl In Mechanical Engineering